The Road to C10 Intervention. 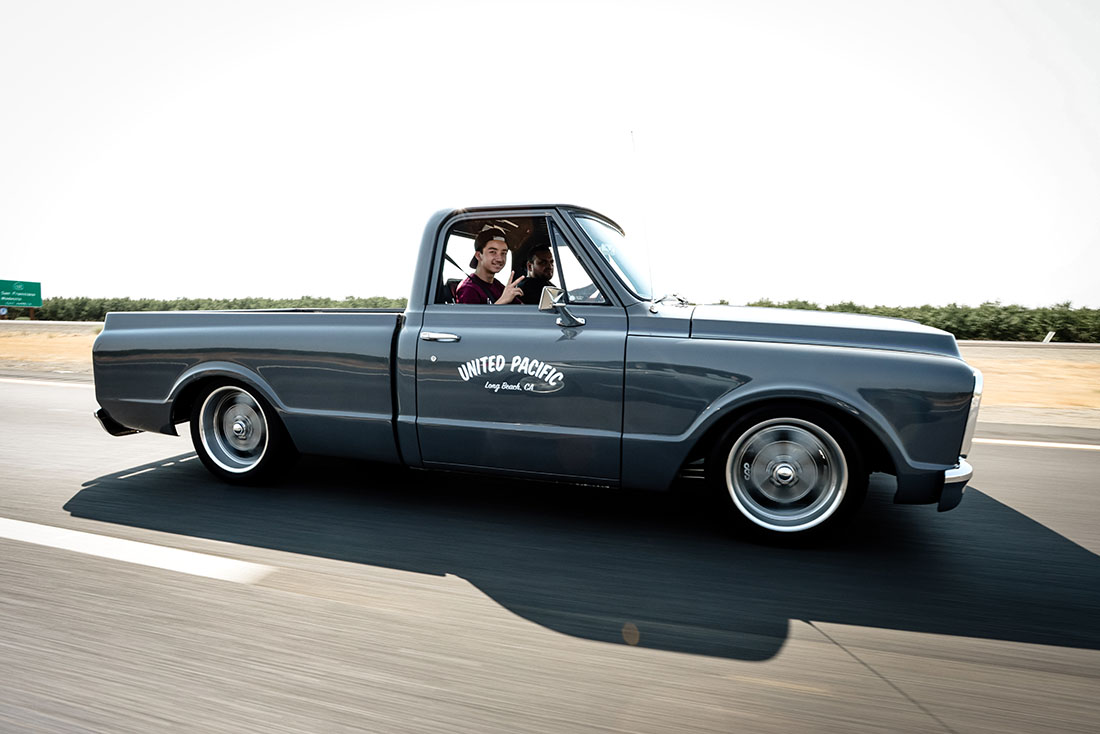 The Road to C10 Intervention.

The excitement for C10 Intervention began well before the show actually started.

It’s hard to believe that C10 Intervention happened a month ago. Time sure does fly, but we remember the event as if it were just yesterday. But before we reminisce about the awesome event, let’s take a trip down memory lane to where adventure began. On Saturday, September 5th, a day before the show, a group of 10-15 of us local C10 enthusiasts from all around Southern California met up at a Chevron gas station in Long Beach at 6:00 o’clock in the very early morning. It was there where I met up with Classic Cars Sales Manager, John Padilla and his nephew co-pilot Matt – who were taking the United Pacific 1971 C10 to Northern California. Along with the other C10 owners, we all filled up our trucks and stocked up on snacks and drinks for the long journey ahead. Setting off on any road trip is always exciting, but there was just something special seeing a squadron of C10s cruising together along the highway.

After driving for about 2 hours and 100 miles or so, we pulled off the highway to refuel. Just in case you didn’t know, C10s aren’t exactly what you call “fuel efficient”. If drinking gasoline was a sport, the C10 would probably take first place. Nevertheless, we charged up the 5 Freeway towards NorCal. After about another half an hour, we exited once again to stop at a travel center to meet up with the rest of the convoy. With all the trucks parked and all lined up beautifully, it was the perfect opportunity to get in some photos.

Following the short detour, we continued on towards our first official stop: Harris Ranch Inn & Restaurant in Coalinga, CA. I decided to break off from the convoy and drive ahead to set up and get my drone in the air to get some shots from the sky. Once the crew arrived, we all parked up and had lunch at Harris Ranch BBQ Express, a fast food version of their restaurant for travelers looking for a quicker alternative which was right up our alley. If you’ve never had BBQ from Harris Ranch, you’re missing out!

What was supposed to be a quick fuel and lunch stop turned into a 2-hour delay due to a couple of our fellow C10 owners having mechanical difficulties.  One of our C10 brethren seemed to be suffering from overheating issues. After closer inspection, the guys discovered that it was culprit was a broken thermostat. With an auto parts store well within driving distance, a couple of the guys fetched a brand new unit and came back to get it installed and the C10’s cooling system was working properly once again.

Just when we thought we were good and ready to continue on the road trip, we noticed a K5 Blazer jacked up with someone inspecting the undercarriage. The owners of the K5 actually came all the way from Texas, but not without a couple of breakdowns along the way. Luckily the issue was just the starter being a bit finicky. As the guys were working on the starter, the rest of us were taking a break and relaxing under the shade. Thank goodness for the tree cover to block the us from the scorching heat from the sun. Yes, it was the beginning of September, but it was still very much summer. Once the K5 fired back up, everyone clapped and rejoiced as we knew we all could continue the journey to NorCal.

After leaving Harris Ranch, the rest of the road trip was pretty trouble free and we all cruised along just fine with minimal to zero traffic. To be honest, I felt a bit pampered in my Civic with cruise control and a working ice-cold A/C. Despite the slight luxuries, I still want to build a C10 one day. Two short hours later, we arrived at our final fuel stop before reaching Auburn where our hotels and the venue were located. What was supposed to take 6 hours turned into an 11-hour fiasco. Despite the delays and obstacles along the way, we still had a blast trekking up north because we were surrounded by a bunch of amazing enthusiasts and that’s what it was all about…

Stay tuned next time for the full coverage story of C10 Intervention!

There are no comments yet